Wait for a Price Correction, or Buy Now? 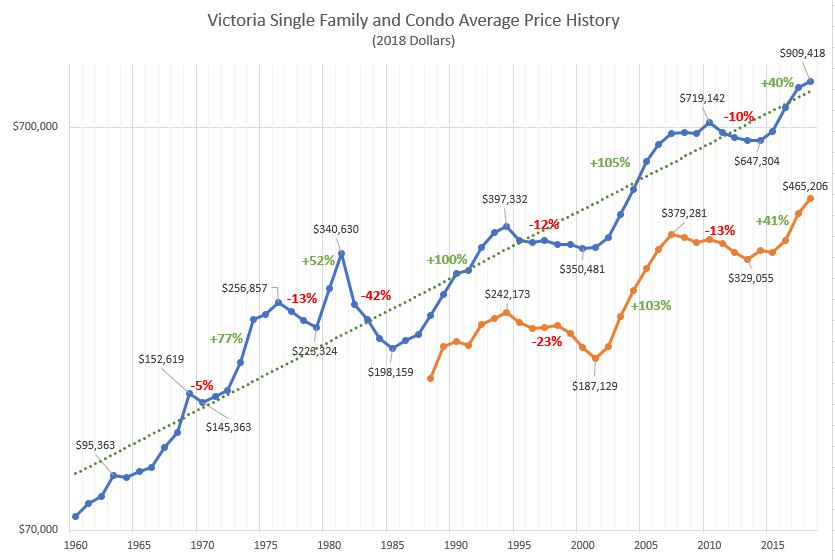 When you’re getting ready to buy property, you start to notice a bewildering variety of talking heads who all have opinions on where the market is going and whether it’s a good idea to buy now or to wait until later. This is called “timing the market”, and regardless of what some may tell you, it’s exceptionally difficult for anyone to do. We only need to look at the history of price corrections in Greater Victoria to demonstrate why.
In 1994, the people who said, “let’s wait on the sidelines for a price correction” were right for about a year and a half while single detached home prices drop 12 per cent until 1996. However, if they kept waiting because they were hoping for an even larger dip, they waited in vain for the next six years while home prices essentially flat lined. Then in 2002, prices exploded and rose an astonishing 105 per cent.
If you were waiting to buy a condo, you would have been considered smart to wait from 1994 to 2002 as condo prices took a long drop down 23 per cent. But would you have known to jump into the real estate market to take the equity gain of 103 per cent over the next six years?
The point is few saw it coming. There may have been some real estate experts who guessed it could happen, but I know of no one who would have staked their reputations on it. Anyone who wasn’t already in the market missed out on the massive surge in appreciation.
In 2011, those who said “wait for a price drop” were correct while average prices dropped 10 per cent for single family homes and 13 per cent for condos. But if they kept waiting for a bigger drop after 2014, they were disappointed and left behind when prices again took off to rise 40 and 41 per cent respectively.
The problem with waiting on the sidelines for a price correction is, no one really knows what prices will do in the short term. There are too many economic variables in play. I encourage my clients to keep in mind what prices have done over the last 30 years (in 2018 dollars). Average condo prices have steadily risen from $180,000 in 1988 to north of $460,000 in 2018.
Will Maija London Condos gains equity in 2020? That’s anyone’s guess and I can’t make that prediction (even though there has been a resurgence in average prices during the last quarter). Can I confidently predict, based on the history of average price changes, that your condo’s equity value will rise over time? Absolutely.
Rather than concerned about timing the market, I always advise it’s better to buy when you are qualified, financially capable, and ready to take on ownership. Your finances are within your control. The housing market is not.
Graph courtesy of House Hunt Victoria
Blogs
All Blog Posts
Blog
Open Houses
Posts By Date
Most Recent
November 2020
June 2020
March 2020
February 2020
January 2020
December 2019
November 2019
October 2019
September 2019
Categories
SW Gateway, Saanich West Real Estate
Vi Fairfield West, Victoria Real Estate
VR View Royal, View Royal Real Estate

Ready to get started?

Call or Email me today and let's discuss your next home sale or purchase.

Chuck Meagher PREC
Century 21 Queenswood Realty Ltd.
Cell: 250-661-4484
rcmeag@outlook.com
2558 Sinclair Rd, Victoria, BC V8N 1B8
Powered by myRealPage.com
MLS® property information is provided under copyright© by the Vancouver Island Real Estate Board and Victoria Real Estate Board. The information is from sources deemed reliable, but should not be relied upon without independent verification.